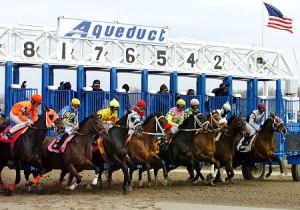 The Wood Memorial is one of two major Kentucky Derby preps to be run this weekend, and it could very well produce the Kentucky Derby favorite if Verrazano takes care of business.

There isn’t much to say about Verrazano that hasn’t been said multiple times by now: he’s the most talented three-year old in the country (maybe with exception of Dreaming of Julia?), he has brilliant speed, and has yet to be challenged in any of his three starts. Many people are saying that he’s simply been that much better than his competition to date, and I completely agree with that. Most expect him to get a stiffer test tomorrow in the Wood, but I’m not so sure that’s going to happen. He’s yet to face a really strong field, and the more I look at the field in the Wood, the more I think there aren’t any world beaters in this group. I expect him to get a very similar trip to the one he had in the Tampa Bay Derby, and I won’t be surprised if he wins by open lengths. Ultimately I think the great equalizer for him will be distance, but that won’t affect him tomorrow. I hate picking chalk, but I don’t think I have a choice in this situation.

Vyjack is the other undefeated “V” racing tomorrow. My biggest issue with Vyjack is I’m not sure what he’s beaten in his races in New York. It’s nearly impossible, even for the greatest horses, to COMPLETELY change their running styles. Vyjack had been on the front end for the first few races of his career, only to completely change that style in the Gotham, coming from well out of it. No question it was an impressive move, but I just don’t know how good I think he is. Tomorrow will go a long way for me and my opinion about him.

Elnaawi is a well-meant Darley runner, but I don’t know if he’s ready to compete with this level of competition just yet. If you’re looking to take a shot against one of the top two, he may be your guy.

There isn’t a whole lot to say about this race – if Verrazano runs a representative race, everyone else is running for second. Picking a favorite is bad enough…picking a favorite that will likely go off around 2/5? Diseased.